One of the most important aspects of the joint research work in 2016/17 are the so-called "Signs of Power". These are intended to serve as a designation for special places, in which rulers, or persons empowered by them, exercised and/or represented symbolic, but also concrete power.
Papers and discussions at the First International Workshop of DPP entitled "Digitising Patterns of Power (DPP): Theory and Practice in Historical Geography and Digital Humanities", which took place from 28 until 29 September 2016 at the Institute for Medieval Research (IMAFO) of the Austrian Academy of Sciences in Vienna, helped to establish a theoretical basis for the common research question of DPP, namely the definition of "Signs of Power" for all case studies and their representation as Dynamic Types within the framework of the DPP OpenAtlas Database.

Following the aforesaid Workshop, members of the DPP project team, namely Katharina Winckler, Veronika Polloczek, David Schmid, Bernhard Koschicek and Mihailo Popović, defined the respective term "Sign of Power", which was given preference over the term "Symbol of Power", since the English word "Symbol" was seen as a concept, which mainly encompasses intangibles, and, therefore, was deemed too narrow for addressing the analysis of the description of space in written sources, the interactions between natural and cultural space and the rise of new political, religious and economic structures of power.
A type tree for the "Sign of Power" was developed by the aforesaid scholars at the end of 2016 and has already been implemented in the DPP OpenAtlas Database. The "Signs of Power" will only be tagged within the entity "Places" (cf. fig. 1).

The "Sign of Power" itself is divided into four large groups, i.e. political, economic, cultic and military, which are again subdivided (cf. fig. 2):


The DPP OpenAtlas Database allows the user to tag places with several "Signs of Power" in order to represent places of greater or lesser importance (cf. fig. 3). 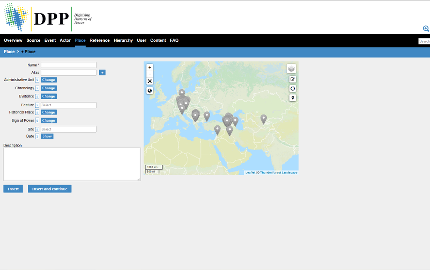 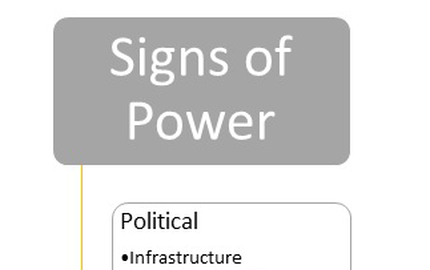 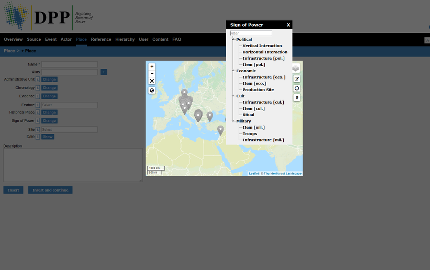